At the end of the 2014-15 season, Chelsea Football Club and Watford Football Club had met 27 times, resulting in four draws, nine wins for Watford F.C. and 14 wins for Chelsea F.C. Both teams currently play in the Premier League, the highest level of English football. 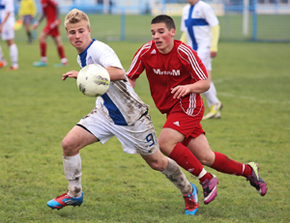 Chelsea was founded in 1905 in Fulham at the Stanford Bridge stadium. As there was already a team called Fulham, Chelsea was named after the adjacent borough, although 'Kensington FC' and 'London FC' were also among the names considered. Watford also has an interesting history of names, they were originally formed as Watford Rovers before becoming the football section of West Hertfordshire Sports Club, leading to the club being renamed West Hertfordshire. After merging with local rivals Watford St Mary's in 1898, the team was renamed Watford Football Club.

Watford's current home kit is yellow and black stripes, however the home strip has been many colours, from the black and white of the 1909-10 kit, to the gold and black of the 1960s and early 1970s which inspired their nickname, 'the Hornets', chosen by popular vote via the supporters club. In 1976 the strip started to feature red and yellow, the colours that are now on their badge. Since 1978 the badge has featured a hart, a male red deer, representing the location of the club in Hertfordshire. Chelsea, on the other hand, have always worn blue shirts, although the shade was lighter until 1912. Their badge has featured a blue lion since 1953, which was inspired by the coat of arms of the Metropolitan Borough of Chelsea, although this became a white lion from 1986 to 2005 before being returned to the original.

The current captain of Watford is Troy Deeney, who joined the club in 2010 and captained the side to promotion in the 2014-15 season. John Terry captains Chelsea, where he has played since 1995, aside from a short time in 2000 when he was loaned to Nottingham Forest. He has also captained the English National Team and is Chelsea's most successful captain, leading them to three Premier League titles, four FA Cups and three League Cups, among others. They are one of the most successful clubs in English football and are always worth watching.