Manchester United Football Club, based in Old Trafford, is the most popular and also amongst the most successful clubs in the whole world. The club traces its origins as 'Newton Heath Football Club' in 1878, and became Manchester United in 1902. Over the years, the club has won 20 league titles, four league cups, 11 FA Cups, 20 FA Community Shields, an UEFA Cup Winners' Cup, three European Cups, a FIFA Club World Cup, one UEFA Super Cup, and one Intercontinental Cup. In 1998-99, the club peaked, winning a rare treble of the the FA Cup, Premier League, and the UEFA Champions League. With revenue of 518 million Euros a year, and valued at $1.2 billion, the club is the second top football club in the world in terms of earnings, and the world's most valuable football brand.

The club crest, especially the 'ship in full sail' insignia, is derived from the Manchester City Council's insignia 'coat of arms.' The club is distinguished by its red and white jersey. The club has a nickname 'The Red Devils' 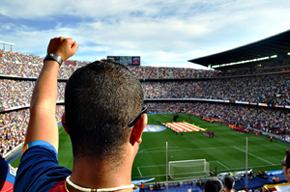 Norwich City Football Club, based in Norwich, Norfolk, is making its return to the Premier League in 2015. The club, established in 1902, has a lively history, and is especially renowned for its long-standing and fierce rivalry with East Anglican rivals Ipswich Town. The fans' song, 'On the Ball, City,' is the oldest football song in the world still in use. The club has won the League Cup in 1962 and 1985, and finished third in the top league in 1993. Their characteristic yellow and green kits, combined with their colour, and club band, gives them the nickname 'The Canaries.'

For the 21015 season, Norwich City FC has lined up an array of starts. The club has transferred in Graham Dorrans, Youssouf Mulumbu, Robbie Brady, and Jake Kean, and loaned in Andre Wisdom. Goalkeepers Mark Bunn, and Remi Matthews, defenders Sebastien Bassong, and Ryan Bennett, midfielders Anthony Andreu, forwards Luciano Becchio, Lewis Grabban, and Gary Hooper, captain Russel Martin, and vice-captain Bradley Johnson are some of the top players in the fairly strong squad that would try to make a grand impression during the club's re-entry into the premier league. Alex Neil is the manager, and Gary Holt is the assistant manager for the season. Dean Kiely is the goalkeeper coach.