Jordan Henderson, who has been with Liverpool since 2011 with 139 appearances and 17 goals, has taken over from Steven Gerrard as captain. 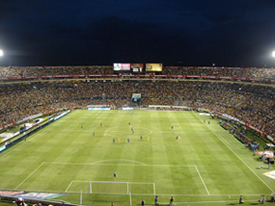 Crystal Palace's captain is Michael John 'Mile' Jedinak, who also captains the Australia national team and has been at Crystal Palace FC since 2011, scoring 10 goals in 138 appearance. In July 2015 Crystal Palace paid their highest ever transfer for Yohan Cabaye, who moved from Paris Saint-Germain. Liverpool also had an expensive transfer season, paying their second highest fee to Aston Villa for Christian Benteke.

Crystal Palace are currently managed by Alan Scott Pardew, who played for Crystal Palace in 1987 to 1991 and helped them win promotion to the First Division in 1989. He has managed the club since the beginning of 2015. Brendan Rodgers has been the manager of Liverpool since 2012 and signed a new four year contract for the club last year.

Liverpool's home strip is all red, inspiring their nickname 'The Reds', whereas Crystal Palace's home kit is red and blue vertical stripes. Crystal Palace are known as 'The Eagles', inspired by the Portuguese club Benfica. An eagle has been incorporated into the club crest since 1973 and since 2010 the club mascot, an American bald eagle called Kayla, flies from one end of stadium to the other at every home game.

Crystal Palace play their home games at Selhurst Park in South Norwood, London. Anfield in Liverpool is the home of Liverpool F.C, whose badge also shows a bird, the liver bird. A mythical creature, the liver bird has been the symbol of the city of Liverpool for over 800 years. Whilst some modern images of the liver bird show it as a cormorant, it is shown on the club badge with a short head and curved beak suggesting it is closer to an eagle, which the liver bird was originally based on.