This popular league fixture matches one of the top five clubs in the Premiership, Liverpool against, newly promoted Norwich, from the Championship.

Liverpool are one of the most widely supported clubs in Europe, famous for their iconic stadium Anfield with its gates proclaiming "You'll never walk alone" and the easily recognisable symbol of the Liver Bird. Fans gather on the terraces of the Spion Kop with a multitude of red and white banners, singing the theme tune made famous by the musical Carousel. They have a fierce local rivalry with close neighbours Everton in the Merseyside derby match.

Liverpool FC have produced some of the leading players in British football over recent years including England internationals such as Steven Gerrard, Daniel Sturridge and current team captain Jordan Henderson. Their squad has been strengthened by foreign players including Belgium's Christian Benteke and goalkeeper Simon Mignolet.

Liverpool have had great success in Europe, winning the European Cup five times, more than any other English team. The 1980s saw a golden decade for the team in which they won the football league six times, two FA cups and two European cups, a record unrivalled by any other team. In 1984 and 2001 Liverpool completed the treble, by winning the League Cup. However Liverpool have yet to win the Premiership title, the one honour from the domestic game missing from the career of their last captain Steven Gerrard. 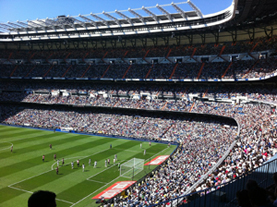 In contrast Norwich City, popularly known as the "Canaries" because of their distinctive yellow and green strip, are yet to experience success at the highest level of the domestic game. Norwich FC was founded in 1902 and currently play at Carrow Road. They were promoted back to the Premiership in 2015 and their best season was in 1993 when they finished third in the First Division. Norwich have a particularly fierce local rivalry with neighbours Ipswich Town in the East Anglian Derby, a fixture that has been played 134 times. They won the Second Division three times between 1972 and 2004 and were play off winners of the Championship in 2014, having been relegated from the Premiership the previous year, when they finished 18th.

Norwich City have a number of famous supporters, including celebrity chef Delia Smith and her husband who are majority shareholders, and the comedian Stephen Fry. Musician Myleene Klaas and singer Sophie Ellis-Bextor are amongst other well known fans of the Canaries.